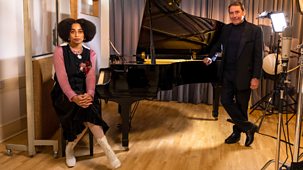 This week, Jools chats to Celeste, the BBC’s Sound of 2020, about her musical journey so far, loves and influences, illustrated by a diverse selection of clips from the extensive Later... archive. The soulful singer made her debut on Later… a year ago, shortly after the release of her hauntingly beautiful breakthrough hit Strange. Celeste, who started making music in Brighton, is now based in London and joins Jools ahead of the much-anticipated release of her debut album, due at the start of 2021. She draws influence from the greats, including Ella Fitzgerald and Aretha Franklin, whose records made up her grandfather’s collection, and the likes of Billie Holiday, whose CD was played on repeat in the Brighton pub she worked at as a teen.\n\nThis week’s performances offer introductions to two artists who are tipped for success in 2021. The first takes us to the legendary Parr Street Studios in Liverpool, where Wigan band The Lathums have been recording their debut album with producers Chris Taylor and James Skelly, the latter the frontman of famed Merseyside band The Coral. The indie four-piece started off at Pemberton’s The Music Project College and have quickly garnered a huge fanbase via a series of EPs, the latest of which, Ghosts, is due at the end of the month. The Memories We Make, a collection of music from their first two EPs, charted at number 14 in July, helped along by a spot on fan Tim Burgess’s renowned Twitter Listening Parties.\n\nSecond up to make their debut on the show is singer-songwriter Joesef, who only started performing his dreamy soulful music at the start of 2019. Previously, Joesef hadn’t considered a career as a singer, but a fateful open mic night changed that when a friend-turned-manager convinced him of the strength of his voice. He creates his personal and emotional lo-fi pop tunes at home, the latest of which, EP Does It Make You Feel Good?, is released on 9 October.

Most recent episodes of Later... with Jools Holland

Jools welcomes grime originator, rapper and songwriter Kano, fresh from his groundbreaking performance at Glastonbury Festival’s Live at Worthy Farm as well as filming the ...

Jools welcomes comedian, writer and music lover Romesh Ranganathan, who is best known for his show The Ranganation as well as hosting Have I Got News for You and presenting his ...

Jools chats to British legend Joan Armatrading. Her 50-year career includes classic songs like Drop the Pilot and Love and Affection, and her new studio album Consequences - her ...

Jools chats to Dublin-born singer songwriter Imelda May about her life and career, including the success of her latest album 11 Past the Hour, which topped the Official Irish Al ...

Jools chats to US musician and BBC 6 Music’s Artist in Residence, Annie Clark aka St Vincent, from her home studio in Los Angeles. They discuss her early life growing up i ...

Jools chats to singer and actor Olly Alexander, best known as frontman of chart-topping band Years & Years and most recently as the star of hit drama It’s a Sin. Olly choo ...

Jools chats to actor, comedian and music lover Lenny Henry, who chooses and discusses his favourite performances from the archive. This special Later... falls on the same night ...

Jools welcomes global superstar, The Voice judge and legendary singer Sir Tom Jones into the studio to discuss his musical journey, loves and influences, as illustrated by class ...

Most popular episodes of Later... with Jools Holland

Joining Jools on the fourth show of this series are five artists, all returning in triumph following debuts at earlier points in their now burgeoning careers.\n\nNorwegian singe ...

Approaching their 30th anniversary are Manic Street Preachers, who come to the show with numbers from their new album Resistance is Futile. This new set sees them hark back to t ...