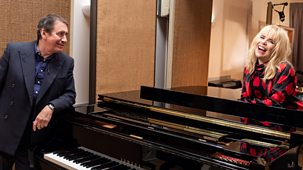 Jools chats to singer and actor Paloma Faith about her musical journey, loves and influences, illustrated by a diverse selection of clips from the show’s extensive archive. A friend of Later..., Faith first appeared in the studio over a decade ago. She chats with Jools ahead of the release of her fifth album Infinite Things, follow up to 2017’s number 1 The Architect. Her forthcoming record was completed before the pandemic, but during lockdown she changed it dramatically to reflect the times, with new songs recorded in a studio set up in her basement.\n\nThere is a unique performance at Jools’s studio from producer, songwriter and musician Fraser T Smith. Famed for his work with the likes of Stormzy, Adele and Dave, Smith is now stepping out with his own music. His first offering, 12 Questions, is a conceptual album based on a series of questions posed by Fraser to different collaborators. The questions are drawn from Smith’s own anxieties surrounding topics of faith, freedom, race, gender, wealth, equality and ecology. He is joined at the piano by one of the album's featured artists, emerging musician and poet Arlo Parks.\n\nAnd there is a specially recorded performance from the much-celebrated Malian songwriter and guitarist Afel Bocoum, recorded on the balcony of his home in the country’s capital Bamako. Last month, Bocoum released his fourth album, Linde, a record of desert blues that blends tradition with influences from across the globe. Executive produced by Damon Albarn and Nick Gold, the album takes its name from the wild expanse near Bocoum’s hometown Niafunke and calls for hope, solidarity and unity in Mali. His musical career kicked off in his teens, as a member of his mentor Ali Farka Toure’s backing group.

Most recent episodes of Later... with Jools Holland

Jools welcomes grime originator, rapper and songwriter Kano, fresh from his groundbreaking performance at Glastonbury Festival’s Live at Worthy Farm as well as filming the ...

Jools welcomes comedian, writer and music lover Romesh Ranganathan, who is best known for his show The Ranganation as well as hosting Have I Got News for You and presenting his ...

Jools chats to British legend Joan Armatrading. Her 50-year career includes classic songs like Drop the Pilot and Love and Affection, and her new studio album Consequences - her ...

Jools chats to Dublin-born singer songwriter Imelda May about her life and career, including the success of her latest album 11 Past the Hour, which topped the Official Irish Al ...

Jools chats to US musician and BBC 6 Music’s Artist in Residence, Annie Clark aka St Vincent, from her home studio in Los Angeles. They discuss her early life growing up i ...

Jools chats to singer and actor Olly Alexander, best known as frontman of chart-topping band Years & Years and most recently as the star of hit drama It’s a Sin. Olly choo ...

Jools chats to actor, comedian and music lover Lenny Henry, who chooses and discusses his favourite performances from the archive. This special Later... falls on the same night ...

Jools welcomes global superstar, The Voice judge and legendary singer Sir Tom Jones into the studio to discuss his musical journey, loves and influences, as illustrated by class ...

Most popular episodes of Later... with Jools Holland

This week, Jools chats to global pop superstar Sam Smith and discovers their own musical journey, loves and influences, illustrated by a diverse selection of clips from the exte ...

This week, Jools chats to Celeste, the BBC’s Sound of 2020, about her musical journey so far, loves and influences, illustrated by a diverse selection of clips from the ex ...

Joining Jools on the fourth show of this series are five artists, all returning in triumph following debuts at earlier points in their now burgeoning careers.\n\nNorwegian singe ...