Back in Time for Birmingham 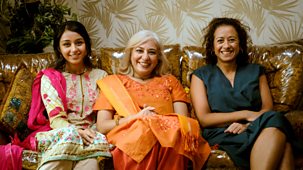 The Sharmas continue their journey through British Asian history, guided by BBC Asian Network’s Noreen Khan and historian Yasmin Khan. By the 1970s, many South Asian families had realised that running your own business was the best way to get ahead in Britain – so the Sharmas are now the proud owners of a shop. Catering to the local South Asian community, which makes up more than ten per cent of Birmingham’s population, Sharma Stores is crammed with large sacks of rice, beans, lentils, atta flour, metal buckets, incense, deities and huge tins of ghee – and has more in common with the markets of Mumbai than the local British shops.\n\nThe Sharmas quickly discover that a shopkeeper’s life involves long hours and plenty of manual labour to keep the shop stocked, priced and competitive. Mum Manisha and daughter Alisha are tasked with cooking authentic delicacies to entice South Asian customers hankering for a taste of home. First up is the notoriously fiddly gulab jamun, an Indian sweet, followed swiftly by savoury samosas. Meanwhile, Dad Vishal and son Akash take it in turns to man the till and restock the shelves, weighing and dividing the large sacks of dried goods into more customer-friendly portions. \n\nThe 1971 war of independence in Bangladesh and Idi Amin’s expulsion of Indians from Uganda in 1972 forced thousands of South Asians to flee their homes, with many taking up their right as Commonwealth citizens to settle in the UK. Akash follows in the footsteps of many young male Bangladeshis who arrived in the early 70s, taking on a job as an onion cutter in a local restaurant. He's under the watchful eye of Michelin-starred chef Akhtar Islam, whose own father came from Bangladesh. These new arrivals helped radically transform the culinary landscape in Birmingham, opening some of the city’s first curry houses and adapting flavours from home to suit the western palate - spawning a multimillion-pound industry. Manisha’s father was born in Uganda and moved to Britain shortly before Idi Amin came to power. Alisha cooks a traditional Ugandan Asian dish, and the family gather with historian Yasmin Khan to reflect on his journey and the thousands who came after bringing little more with them than the clothes on their backs.\n\nAs their businesses began to prosper, South Asian families were able to invest, so the Sharmas take delivery of their first car – a glorious brown Austin Allegro, made at the firm’s Longbridge plant in Birmingham. Manisha and Vishal head off for a spin, taking in the city’s latest tourist attraction, the newly opened Spaghetti Junction, before arriving at Birmingham’s first South Asian cash-and-carry: East End Foods. As they load up the car, they discover how the company’s founders, the Wouhra brothers, had spotted a gap in the market - supplying ingredients like atta flour, chickpeas, spices and chillies in family-sized packaging to sell on to new South Asian shopkeepers like themselves. \n\nNoreen Khan joins the family for a rare evening enjoying an innovative new sound that’s sweeping the Midlands: bhangra. The music fuses western pop, Hindi film soundtracks and folk music from the Punjabi region, and was first created in Birmingham. The Sharmas are joined by friends and family to dance the night away with a band fronted by bhangra legend Balbir Singh.\n\nChange comes at a dizzying pace over the next few years. Alisha takes on her first job outside the home and learns the story of the Imperial Typewriters strike, where a group of South Asian women took on their bosses to demand equal pay and opportunities to their white counterparts. Along with Manisha, she also meets Samira Ahmed to hear about the iconic Pebble Mill Studios and its production of programmes celebrating South Asian culture. Against a backdrop of rising unemployment, inflation and the cost of living, by 1976 South Asians were increasingly becoming the target of far-right groups such as the National Front. Attacks on people and property were on the rise, culminating in violence on the streets in the hot summer of '76. The Sharmas experience just a small fraction of what was becoming a daily occurrence for British Asian communities in the UK.\n\n1977 sees an excuse for a party. While the Queen commemorated her silver jubilee, British nationals with Indian, Pakistani and Bangladeshi heritage were also marking the anniversary of Partition. The family takes a rare day off from working in the shop and heads to the park for a celebratory picnic.\n\nAs the decade draws to a close, Noreen and Yasmin Khan join the family for a party. The family reflect on the decade, concluding that although much has moved on in terms of representation and acceptance, it has been a decade marked by struggle. They look forward to better times - and better clothes! - in the 80s and 90s.

Most recent episodes of Back in Time for Birmingham

Most popular episodes of Back in Time for Birmingham