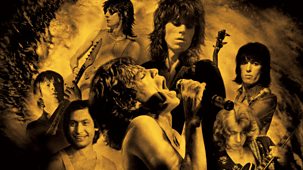 Crossfire Hurricane, directed by Brett Morgen, provides a remarkable new perspective on the Stones' unparalleled journey from blues-obsessed teenagers in the early 60s to rock royalty. It's all here in panoramic candour, from the Marquee Club to Hyde Park, from Altamont to 'Exile, from club gigs to stadium extravaganzas.\n\nWith never-before-seen footage and fresh insights from the band themselves, Crossfire Hurricane places the viewer on the frontline of the band's most legendary escapades.\n\nTaking its title from a lyric in Jumping Jack Flash, Crossfire Hurricane gives the audience an intimate insight, for the first time, into exactly what it's like to be part of the Rolling Stones, as they overcame denunciation, drugs, dissensions and death to become the definitive survivors.\n\nThe odyssey includes film from the Stones' initial road trips and first controversies as they became the anti-Beatles, the group despised by authority because they connected and communicated with their own generation as no-one ever had. 'When we got together,' says Wyman, 'something magical happened, and no one could ever copy that'.\n\nRiots and the chaos of early tours are graphically depicted, as is the birth of the Jagger-Richards songwriting partnership. The many dramas they encountered are also fully addressed, including the Redlands drug bust, the descent of Brian Jones into what Richards calls 'bye-bye land', and the terror and disillusionment of 1969's Altamont Festival. \n\nThe film illustrates the Stones' evolution from being, as Mick vividly describes it, 'the band everybody hated to the band everybody loves': through the hedonistic 1970s and Keith's turning-point bust in Canada, to the spectacular touring phenomenon we know today. Richards also reveals the song that he believes defines the 'essence' of his writing relationship with Jagger more than any other.\n\nThe film combines extensive historical footage, much of it widely unseen, with contemporary commentaries by Mick Jagger, Keith Richards, Charlie Watts, Ronnie Wood and former Stones, Bill Wyman and Mick Taylor.

Crossfire Hurricane, directed by Brett Morgen, provides a remarkable new perspective on the Stones' unparalleled journey from blues-obsessed teenagers in the early 60s to r ...

Crossfire Hurricane, directed by Brett Morgen, provides a remarkable new perspective on the Stones' unparalleled journey from blues-obsessed teenagers in the early 60s to r ...