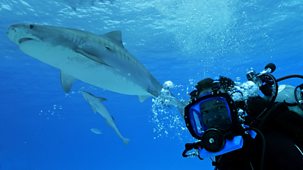 Sharks are a mainstay of Steve’s Deadly 60, slicing through his ratings with their size, speed and power. They are among the most spectacular predators on the planet - but they’re in trouble. Each year, 100 million sharks are killed by people and a quarter of all sharks and rays are now threatened with extinction - but why are they under threat? And what can we all do to help?\n\nIn this special episode of Deadly 60, Steve travels to the Bahamas, shark capital of the world, to find out what it will take to save our sharks. He starts with a shark new to the Deadly 60 – the great hammerhead. These monster sharks are solitary predators given a wide berth by other sharks, and with good reason - they eat a huge range of prey from rays to octopus to smaller sharks, even other hammerheads. The dive gets pretty intense with hammerheads everywhere and Steve needs eyes in the back of his head to keep track of them all.\n\nSharks don’t just stay in one place and can migrate huge distances. It’s therefore important to understand where they go if we are to help them. Steve joins shark scientist Stephen Kaijura as he takes to the skies to survey one of the most spectacular animal gatherings on earth – the migration of thousands of blacktip sharks along the Florida coast. A mass of black shapes surge and swirl in the water, metres away from unsuspecting bathers, who are completely safe. Stephen explains that this migration has been happening for millennia but is now under threat due to climate change.\n\nHowever, by far the greatest threat to sharks comes from humans killing them on a devastating scale. They are caught for their meat and often just for their fins, which are used to make shark fin soup, considered a delicacy across much of Asia. A kilo of shark fins can sell for up to $650, and often the rest of the shark is simply thrown back in the sea once the fin has been removed.\n\nScientists estimate as many as 273 million sharks could be killed every year, but there is hope! Steve finds it back in the Bahamas, kitting up for a very special dive in a place close to his heart: Tiger Beach, home of possibly the world’s greatest shark dive. Explaining how this site has been protected by the Bahamian people, Steve sits on the edge of the boat and gets the sleeve of his wetsuit chomped by a hungry lemon shark. He dons chainmail sleeves to protect his hands and arms and jumps in. He is quickly surrounded by nurse sharks, bull sharks and more great hammerheads, but the star attraction soon appears – the tiger shark. A cleverly camouflaged hunter, with serrated teeth that can slice through shell and bone, the tiger shark is a founding member of the Deadly 60. They crowd around Steve, dwarfing all the other sharks , providing one of the most dramatic wildlife encounters in the world.\n\nBack at the surface, Steve explains that in the Bahamas sharks are worth more alive than dead, and that could be a model for shark conservation worldwide.

Most recent episodes of Deadly 60

Steve Backshall looks at animals that are both deadly and endangered.\n\nSteve explores why mighty animals like the chimpanzee, mountain gorilla and harpy eagle are threatened w ...

Steve and the team are at the Museum of Natural History in Oxford. Steve takes a look inside some of the top predators featured on Deadly 60 to find out what makes them so deadl ...

Wildlife series. In this Deadly 60 Special, Steve Backshall takes a look at the incredible methods animals employ to protect themselves against predators.

Steve demonstrates how reading the tracks and signs left by an animal can lead to fantastic encounters. Lions, octopuses and badgers all feature in this special as Steve and his ...

Ever wondered how Deadly 60 gets made? This programme goes behind the scenes to see just how the series is filmed. From where the team eat and sleep to the extreme measures they ...

Wildlife series. Steve Backshall investigates how humans around the world are increasingly coming into contact with dangerous and potentially lethal animals.

Steve and the crew have almost come to the end of their journey to find the Deadly 60. They are in Peru, searching for elusive giant river otters. Steve has a chance encounter w ...

Most popular episodes of Deadly 60

Wildlife series. Steve Backshall investigates how humans around the world are increasingly coming into contact with dangerous and potentially lethal animals.

An exotic pet is something that is slightly different from your average cat, dog or hamster and is often an animal from a far-flung place. Steve has kept snakes, spiders and sco ...

Steve and crew pitch up in British Columbia, Canada. It is an explorer's paradise with infinite untouched wilderness and spectacular animals, but Steve's focus is on t ...

Steve and the crew travel to Borneo, a giant jungle island in Southeast Asia and a place close to Steve’s heart. The jungle is packed full with some of the weirdest, most ...

In this episode, Steve is in South Africa, home to a huge number of animals on the Deadly 60. However, big predators aren’t what Steve is here for – he’s explo ...

Steve Backshall and his long-suffering crew return for a series of deadly encounters with animals hoping to earn a place on his hallowed Deadly 60 list.\n\nSteve and the team ar ...